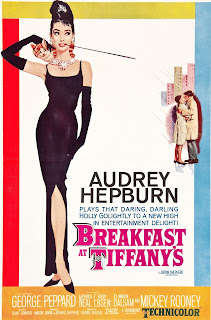 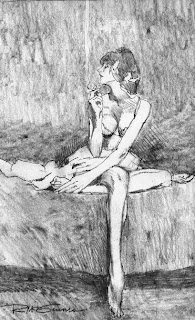 Robert McGinnis was an America illustrator who created over 1200 paperback book covers as well as over 40 movie posters in his career.
There was a time in the 1960s, in American illustration, where the artwork became subordinate to the over-all composition, an obvious influence of the prevailing minimal asthetics.
In the above artwork the flat minimalist execution of Audrey’s dress relegate it to a symbolic hour-glass shape. Likewise, the cigarette holder is utilized as a line element to direct your eye to the couple on the right.
You are then directed to the toe which works as a literal black arrow to indicate the white typography before shooting your eye back up to the iconic hour-glass shape and around again…
Both of these minimalist compositions have a balancing act between organic and inorganic elements (typography, line, shape, color…) in which all, including the illustration, are an integral part of the composition.