This 1930’s documentary newsreel (in Universal's "Going Places" series) offers an in-depth glimpse into the Universal/Walter Lantz animation studio, featuring narration by legendary newsman Lowell Thomas. Assembly-line steps from script to screen in the creation of the Oswald The Rabbit cartoon "The Softball Game" are shown. Glimpses are given of the story development, creator Walter Lantz himself pitching in with gags and direction with a very "Brooklynite" twang, animators at work making funny faces, composers, background painters, cameramen, voice artists, sound effects & music departments, and more. 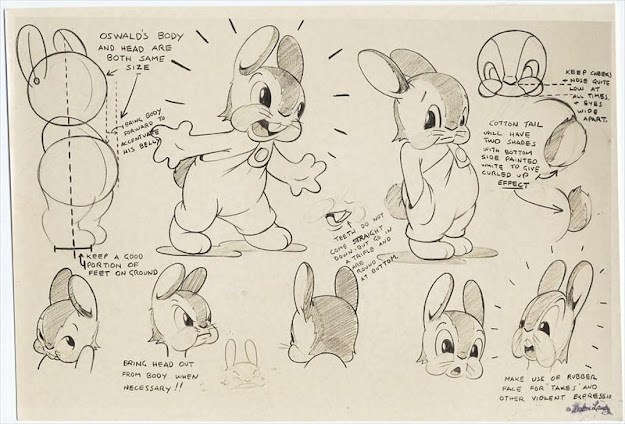 Beginning in the early 1930s the Disney Studio introduced the model sheet to animated filmmaking, and other studios quickly adopted this device for circulating images of its animated characters and/or atmosphere and concept art among artists and animators working in production of a film. Before the 1970s they were generally reproduced by a photostatic, photographic, or printing process. Model sheets were made when a character or setting was in development and to help animators maintain a consistent look to the character throughout the film. This scarce photographic model sheet featuring full-figure and portrait poses, notes, and a detailed construction of Oswald was made at the Walter Lantz Studio during production of the Oswald the Rabbit cartoons of the later-1930s, and it was issued to animators for use in drawing the character. Oswald was originally created by Walt Disney, who lost the character when his distributor decided to make the cartoons with Walter Lantz. Oswald was Lantz' main cartoon star of the 1930s. The sheet is stamped "© Walter Lantz" at lower right.

Posted by garret mcfann at 1:57 PM No comments: